Improve quality of your life after Discectomy . 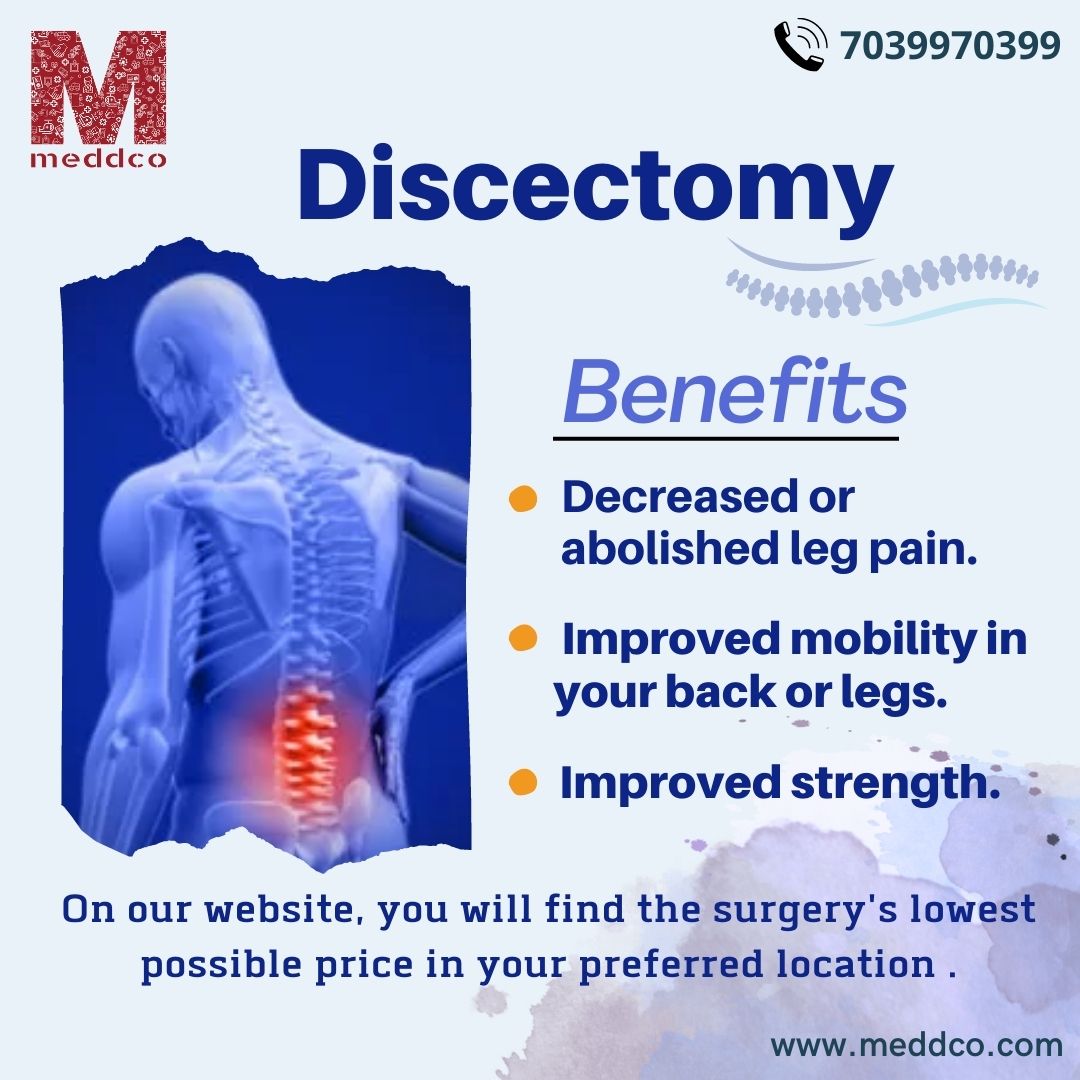 The most common surgery for lower back pain is a discectomy, which is used to treat disc herniations. It is frequently used in conjunction with other spinal procedures such as laminotomy, foraminotomy, artificial disc replacement, and other forms of spinal fusion. There are two types of discectomy techniques: traditional open discectomy and minimally invasive discectomy.

Why is it done?

A discectomy is performed to relieve the pressure that a herniated disc (also known as a slipped, ruptured, bulging, or prolapsed disc) places on a spinal nerve. A herniated disc occurs when some of the softer material within the disc pushes through a crack in the disk's outer lining.

A discectomy may be recommended by a doctor if:

The most common reason for discectomy is a herniated disc with nerve root compression or spinal canal stenosis, which is associated with the following symptoms:

What you can expect

During the discectomy procedure

Diskectomy is typically performed under general anesthesia, so you are not awake during the procedure. Ideally, only the portion of the disc that is compressing the nerve is removed. However, in order to reach the herniated disc, small amounts of spinal bone and ligament may need to be removed.

If the entire disc must be removed, your surgeon may need to fill the space with bone from a deceased donor or your own pelvis, or a synthetic bone substitute. Metal instrumentation is then used to fuse the adjoining vertebrae together.

Following surgery, you are transferred to a recovery room where the medical team monitors for complications from the surgery and anesthesia. You may be able to leave the hospital on the day of surgery. However, for those with serious medical conditions, a brief hospital stay may be required.

You may be able to return to work in 2 to 6 weeks, depending on the amount of lifting, walking, and sitting required by your job. If your job requires heavy lifting or the use of heavy machinery, you may have to wait 6 to 8 weeks before returning to work.

A general overview and example of various discectomy techniques are provided below 1,2. The technique may vary, particularly in certain settings such as extraforaminal discectomy.

For sciatica caused by disc herniations, discectomy can improve outcomes in the short and medium term, lasting up to four to five years. Recurrent disc herniation on the same level affects up to 9% of patients, and nearly two-thirds of them, or nearly 6%, require repeat surgery.

A significant disadvantage of traditional open discectomy is the extensive injury to paraspinal muscles and ligamentous structures, which causes surgical scar formation and may result in adverse postsurgical clinical outcomes or failed back surgery.

MEDDCO.COM is India's first digital pricing online platform, where price transparency is the key. Our website allows users to search for surgical procedure diagnostic tests and other healthcare services amongst various hospitals and a healthcare provider.

On our website, you can find the best package price for Discectomy .You can also book an online appointment through our website. For more information visit our website.