An Overview of Cystic Hygroma 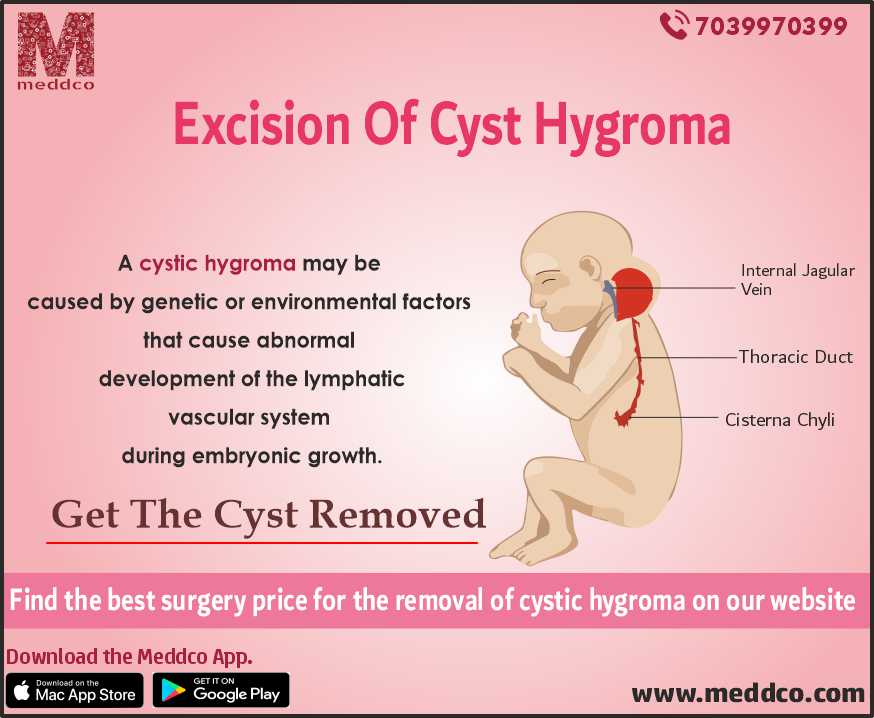 Cystic hygroma (CH) is a group of cysts in the lymph drainage system that typically affects children's heads and necks (fetuses and newborns to age 2 years).

What exactly is cystic hygroma?

The cystic hygroma is a lymphatic lesion made up of a cluster of cysts that may form in practically any place of the body, although it most often affects the head and neck (approximately 75% of the time), most typically on the left side. Cystic hygromas (CH) may also be referred to as cystic lymphangiomas or macrocytic lymphatic abnormalities. The majority (over 50%) are observed at birth, and around 80% to 90% are present by 2 years of age. Cysts smaller than 2 centimetres in diameter are classified as microcystic, whereas cysts more than 2 centimetres are classified as macrocytic.

The aetiology of cystic hygromas is unknown, however, genetic abnormalities are present in around 25% to 75% of afflicted infants. Individuals with Turner syndrome, Down syndrome, or Klinefelter syndrome are more likely to develop the condition.

How is cystic hygroma identified?

On inspection, some patients have obvious lesions that allow the diagnosis to be made, while others do not. Soft tissue lesions may be seen via an MRI, CT scan, ultrasound, and, on rare occasions, X-rays. Other investigations, such as airway fluoroscopy and lymphoscintigraphy (radiographic lymph node mapping), have been employed. Endoscopic biopsy has also been utilized to make a diagnosis.

Cystic hygromas in fetuses have been diagnosed with ultrasound as early as the first trimester.

During a prenatal ultrasound, cystic hygroma might be seen. The infant may show extra fluid at the back of their neck during the ninth week of pregnancy. This will appear as a clear gap on the ultrasonography as "increased nuchal fold," "nuchal lucency," or "nuchal thickness." A blood test around 15-20 weeks of pregnancy may also indicate whether the infant has cystic hygroma. This test detects elevated amounts of alpha-fetoprotein in the mother's blood, which may suggest the existence of cystic hygroma.

Every three to four weeks, doctors will use ultrasound to check the hygroma. During these ultrasounds, the doctor will also look for hydrops, an accumulation of excess fluid in the baby's body that may lead to miscarriage.

If the mother has hydrops or if the hygroma is big enough to prevent the head from going through the birth canal, a Cesarean section may be performed. In a few situations, the baby's karyotype is normal, and the cystic hygroma is tiny enough to disappear throughout pregnancy. The baby may then be born healthily and at full term.

What are the indications and symptoms of cystic hygroma?

The symptoms and indicators of cystic hygroma differ depending on where the cyst cluster is located. However, since so many are present in the neck, they might induce symptoms ranging from non-existent to severe. The following are the signs and symptoms of cystic hygroma:

on the buccal mucosa or the tongue, clusters of transparent, black, or red vesicles (microcystic form)

haemorrhage inside the lesions (rare)

What is the best way to cure cystic hygroma?

In children with cystic hygroma but no symptoms, some practitioners opt to "watch and wait." If symptoms arise, there are two basic treatments: medical, which involves the use of chemicals to scar or destroy the cysts, and surgical removal of the cystic tissue. Some writers believe that surgical removal is the best option. Radiofrequency ablation and laser-induced thermotherapy have also been utilized to treat the lesions. Parents should explore treatment choices with their child's treatment team, which is often composed of the child's physician, a surgical expert, and/or an otolaryngologist.

How are cystic hygromas in children treated?

While the infant is still in the womb, cystic hygromas cannot be treated.

The infant will be continuously checked after delivery to ensure that they can breathe correctly. Small cystic hygromas sometimes go away on their own, but the vast majority of these cysts develop to be very enormous, sometimes bigger than the baby's head. When cystic hygromas are infected or bleeding on the inside, they develop more quickly. They must be addressed as soon as possible to prevent the infant from developing more issues as they grow older.

Surgery: If a neonatologist advises surgery, the cyst will need to be removed during an overnight hospital stay.

Sclerotherapy: This 30-minute outpatient technique is often used to treat recurrences or tiny regions of residual illness following surgery. The infant will first be put under general anaesthesia. A radiologist will next use ultrasonography to insert a tiny needle into the cyst. Following that, they will provide a medication that causes lymphatic veins to constrict. Bleomycin, ethanol, and doxycycline are examples of sclerosing agents. In contrast to surgery, no incisions are performed, therefore the infant will not have a scar. Because there are more lymphatic channels to reduce when treating bigger growths, these treatments are more successful.

During surgery, babies risk damage to facial nerves and blood vessels. The wound may develop infected as a result of the surgery. There is a chance of haemorrhage and lymphatic drainage. Even after the cyst has been apparently removed, it is possible for it to reappear. Despite these dangers, many clinicians prefer surgery over sclerotherapy as their first line of treatment, particularly if the lesion is tiny and simple to remove.

What is the prognosis for cystic hygroma?

Cystic hygromas have a varied prognosis, ranging from good to poor. For example, removing most but not all cystic hygroma tissue results in a 15% likelihood of recurrence.

Stomach pain in Children: Possible causes all must know

What is the treatment for cleft palate.

An innovative feeding appliance for your infant.