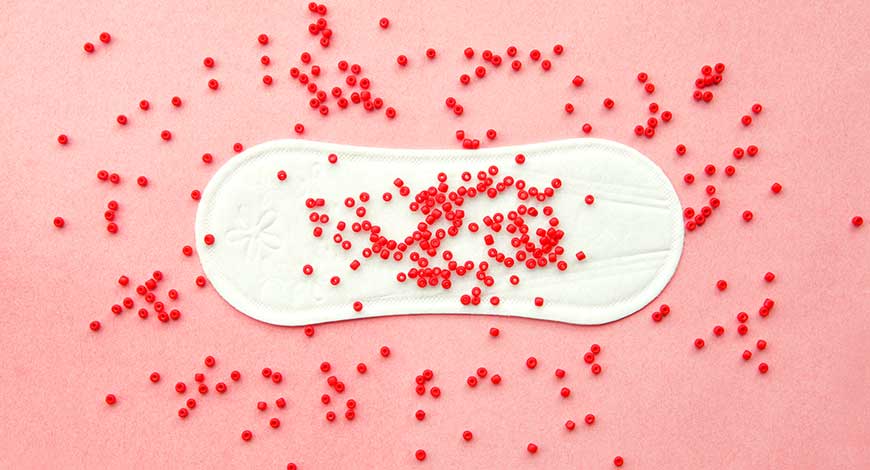 A period, or menstruation, is the shedding of the lining of the womb. Menstruation is also known as menses. Menses are part of normal sexual health for women during their reproductive years.

Menstruation that includes bleeding from the vagina is found mainly among humans and similar animals, such as primates.

The endometrial tissue is shed from the womb and is released through the vagina.

Women have a period approximately every 28 days; however, there is some variation in this cycle, ranging from a 24-day to a 35-day cycle. A period is part of the woman’s menstrual cycle. It is a sign that the body is working normally.

What is a period?

Menstruation marks the beginning of a woman’s reproductive years. From the time when she has her first period, or a few days before, she can become pregnant. Menstruation will end with menopause, usually between the ages of 45 and 55 years.

A young woman will notice her first period because blood will come from her vagina.

A woman has two ovaries, each of which contains a number of eggs. Every month during the reproductive years an egg will be released. Also, every month, the womb prepares a lining in case the egg should become fertilized. If the egg does not become fertilized, the lining is not needed and, together with the egg, it will be shed. We see this shedding as blood. This is what we call a period.

If the egg is fertilized, the womb will need the lining, and it will not be shed. This is why periods stop when pregnancy begins.

When do periods start?
Menarche is the start of periods. It will occur when all the parts that make up a girl’s reproductive system are mature and working together.

A girl’s periods generally begin between the ages of 12 and 14 years, but this can vary from 8 to 16 years. Menstruation is a major stage in a girl’s puberty. It is one of several physical signs that a girl is becoming a woman.

Around 6 months before getting her first period, a girl may detect more clear vaginal discharge. Unless the discharge has a strong odor or causes itchiness, this is normal and nothing to worry about. The periods will occur regularly until the woman reaches her menopause.

Hormones are released by the pituitary gland in the brain to stimulate the ovaries during the reproductive cycle. These hormones cause some of the woman’s eggs, which are stored in the follicles of her ovaries, to start to grow and mature.

The follicles start producing a hormone called estrogen. The increased estrogen causes the womb lining to become thicker in preparation for receiving a fertilized egg.

If a woman has had sex within several days of the egg being released and sperm is present in her fallopian tube, the egg may become fertilized and she will become pregnant.

However, it is important to note that pregnancy is possible with unprotected sex at any time during the menstrual cycle.

If the egg is not fertilized, estrogen and progesterone levels will drop, and the lining of the uterus (endometrium) will start breaking down. This marks the start of the period.

The period consists of a small amount of blood and the endometrium. The bleeding is caused by the breaking of fine blood vessels within the womb as the lining detaches itself.

A period generally lasts about 5 days. Bleeding tends to be heavier during the first 2 days. Even when the blood flow seems heavy, the amount of blood lost is usually around 5 to 12 teaspoons.

Some women experience heavier than normal periods, known as menorrhagia. Menorrhagia should be evaluated by a doctor as it can lead to problems such as anemia, because of a low blood count.

Premenstrual syndrome (PMS) or premenstrual tension (PMT) is a collection of emotional, psychological, and physical symptoms that are linked to a woman’s menstrual cycle.

Symptoms that may be felt by some women in the days leading up to her period include:

As soon as the period begins and the woman starts shedding blood, the symptoms generally improve. In most cases, symptoms will be completely gone by the time the period has ended.

The following factors may increase the chances of PMS:

Irregular periods
The average length of a cycle is 28 days, but it can vary from 21 to 40 days.

For many women, the length of the cycle and the amount of blood shed is around the same every cycle. However, some women have irregular periods.

There may be variations in:

Irregular periods can have different causes, and treatment will depend on the cause.

It is not unusual to have irregular periods for up to 6 years after the start of menstruation or during perimenopause, when the woman’s body is preparing for menopause.

Many women have missed a period at some time. This could be for no apparent reason, or in anticipation of a pregnancy, or perhaps because of anxiety or tension.

Irregular periods may be caused by a wide range of factors including the following:

Anyone who is concerned about irregular periods should see a doctor.

What is amenorrhea (absent periods)?
Amenorrhea is when a woman stops having periods altogether, usually having missed three periods in a row. It is also used if a girl has not begun menstruation by the age of 15 years.

Reasons for this include:

Pain
This is a medical condition that includes severe uterine pain during menstruation.

Most women experience minor pain during menstruation, but if the pain is so severe that it interferes with normal activity, it is called dysmenorrhea. It may require medication.

Some women experience pain during the days before a period, while others have dysmenorrhea during the period. As menstruation tapers off, the pain generally does, too.

Some women experience both dysmenorrhea and menorrhagia, or excessive blood loss.

The following symptoms may be present:

Dysmenorrhea is more likely in the following groups:

Secondary dysmenorrhea can occur with some health conditions related to the reproductive system, including endometriosis and fibroids.

Pregnancy
Here are some facts about menstruation and pregnancy:

Treatment
Women who experience uncomfortable symptoms related to menstruation may find that treatment offers some relief.

Painkillers: For period pains and discomfort, painkillers can be effective. These could include acetaminophen (Tylenol), ibuprofen, and aspirin.
Contraception: The contraceptive pill often eases period pains. The lining of the uterus will be thinner, resulting in less contraction during menstruation.
Exercise: Exercise has been found to help reduce the level of discomfort and pain experienced by women with period problems.
Relaxation techniques: These can include breathing exercises, massage, and medication. Some women practice yoga for easing pain and stress.
Heat treatment: Holding a hot water bottle against the abdomen may help in reducing discomfort.
Warm bath: Apart from helping with relaxation, a warm bath may also provide some relief from pain or discomfort.

Products
Menstrual products used to absorb or catch the menses come in either disposable or reusable forms.

Reusable menstrual products
Cloth pads: These are generally made of cotton, terrycloth, or flannel. They are placed externally. They are washable.
Menstrual cups: These are inserted directly into the vagina to catch the menstrual flow. They are reusable. There are also disposable versions.
Reusable underwear: Often called “padded panties,” these are usually made of cotton with absorbent layers sewn on. They can be washed and reused.
Blanket: Also known as a towel or draw sheet. These are large pieces of cloth that are placed between the legs used during sleep. They can be washed and used again.

Disclaimer: This article is sourced from medicalnewstoday.com without any changes in the contents thereof. Only the title has been edited by Meddco.com The facts and the opinions appearing in the article do not reflect and describe views of meddco.com